Easier access to your trusted, local news. Have a look at our digital subscription packages!

Transport for London (TfL) has secured a bailout from the Government worth around £1.8 billion.

The capital’s transport body said the agreement will enable it to continue operating services until the end of March 2021.

The exact amount of money involved is subject to passenger revenue in the coming months.

Amendments to the Congestion Charge introduced in June as part of a previous bailout – a 30% increase in the fee and longer operating hours – will remain in place due to the new deal.

This is not a perfect deal, but we fought hard to get to the best possible place

Last month Boris Johnson claimed TfL was “effectively bankrupted” before coronavirus, and proposals to hike charges were “entirely the responsibility” of Mr Khan.

Responding to the new agreement, Mr Khan said the negotiations have been “an appalling and totally unnecessary distraction at a time when every ounce of attention should have been focused on trying to slow the spread of Covid-19 and protecting jobs”.

He went on: “I am pleased that we have succeeded in killing off the very worst Government proposals.

“These proposals from the Government would have hammered Londoners by massively expanding the Congestion Charge zone, scrapping free travel for older and younger Londoners and increasing TfL fares by more than RPI+1.

“I am determined that none of this will now happen.

“This is not a perfect deal, but we fought hard to get to the best possible place.

“The only reason TfL needs Government support is because almost all our fares income has dried up since March as Londoners have done the right thing.”

Transport Secretary Grant Shapps said: “This deal is proof of our commitment to supporting London and the transport network on which it depends. 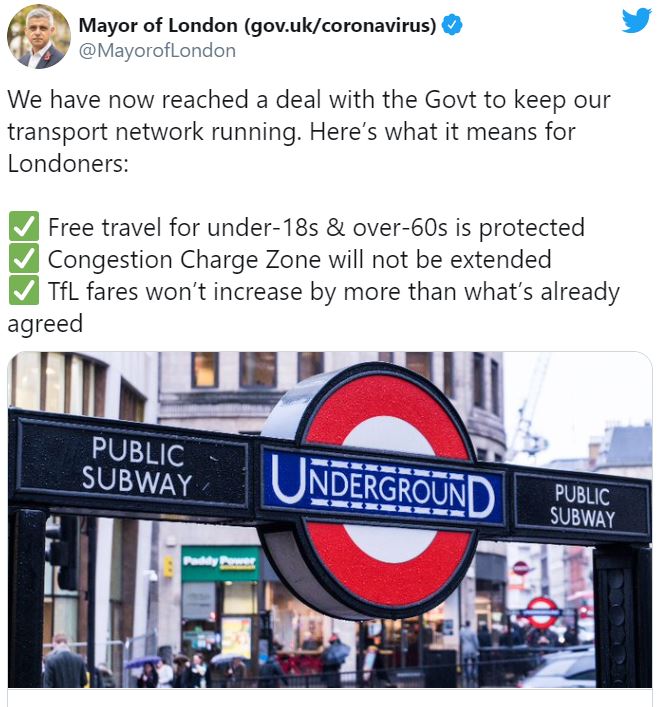 “Just as we’ve done for the national rail operators, we’ll make up the fare income which TfL is losing due to Covid.

“Londoners making essential trips will continue to be able to use Tubes, buses, and other TfL services, thanks to this Government funding.

“At the same time, the agreement is fair to taxpayers across the country. The mayor has pledged that national taxpayers will not pay for benefits for Londoners that they do not get themselves elsewhere in the country.”

He added discussions will continue over the coming months to achieve a “long-term settlement”, which will include London being given “more control over key taxes so it can pay more costs of the transport network itself”.

City Hall said current passenger revenue projections mean the bailout is worth around £1.8 billion in grants and borrowing.

TfL will carry out cost savings to make up a remaining £160 million “gap” based on its forecasts.

Keep up-to-date with important news from your community, and access exclusive, subscriber only content online. Read a copy of your favourite newspaper on any device via the HNM App.