MORAY Council's ill-starred dredger MV Selkie has spent another long period out of action due to mechanical problems, it has been revealed. 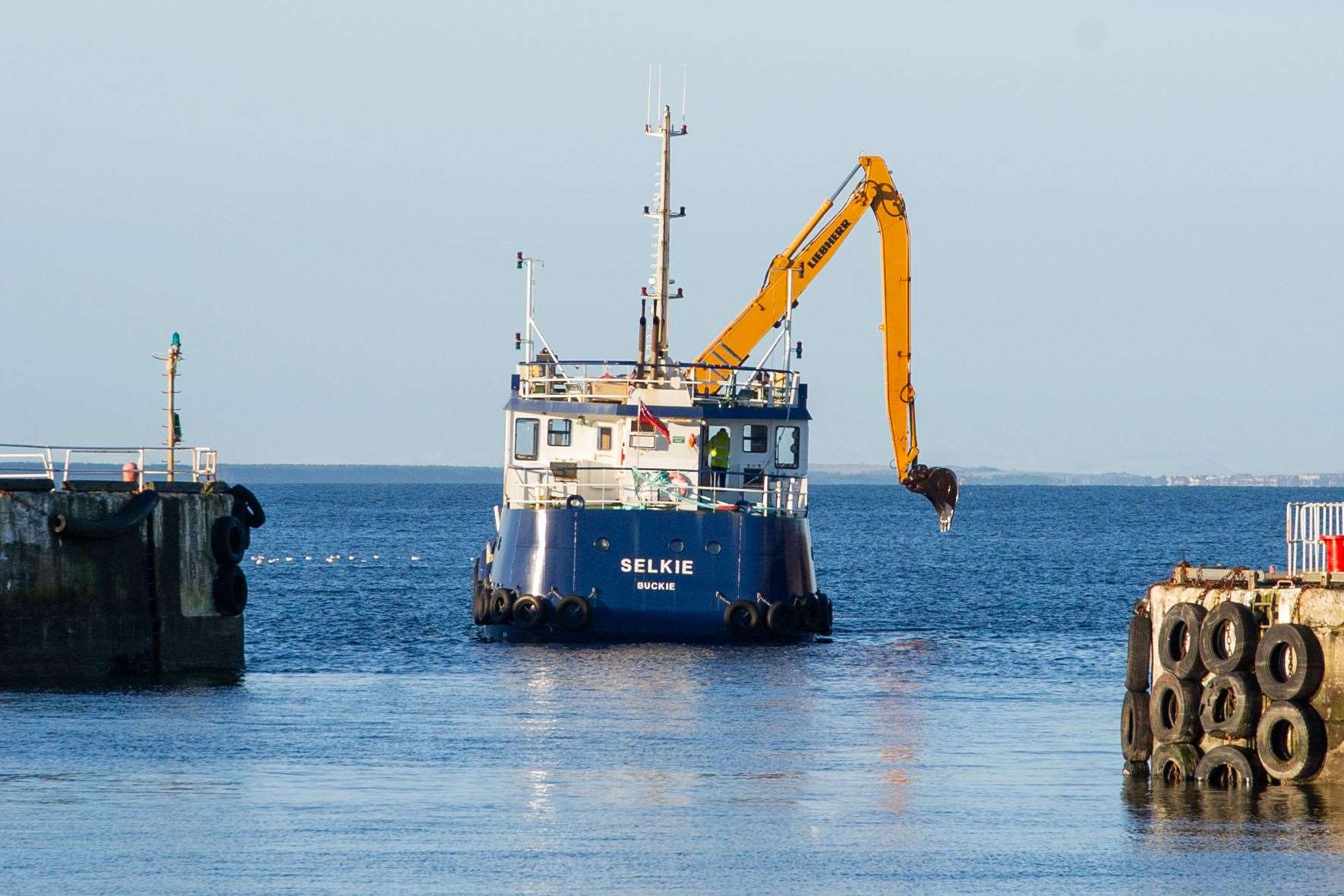 The most recent meeting of the local authority's economic growth, housing and environmental sustainability committee heard that there had been no dredging operations over the space of the third quarter of 2020-21 due to the digger breaking down and requiring a new engine.

It is the latest in a long line of technical problems to beset the £2.5 million vessel since she was launched with great fanfare at Buckie Harbour in May 2016. In addition to keeping the council's six harbours – Buckie, Findochty, Portknockie, Cullen, Burghead and Hopeman – clear of silt it was also envisaged that the Selkie would earn income through being hired out to other local authorities and harbour boards.

A spokesperson for Moray Council said: "The dredger has been in operation since the beginning of the calendar year, working out of Buckie and Burghead up until the beginning of February, before moving over to Findochty in order to maximise the dredging opportunities at Findochty Harbour following the removal of the pontoons.

"The crew are currently on shore leave and when they reconvene we’ll assist the contractor at Findochty with the lifting of chains and anchor, before the commencingdredging here.”

Buckie councillor Sonya Warren (SNP) expressed her disappointment at the need and highlighted the need to find a permanent solution.

She said: "I'm deeply disappointed to learn that once again the dredger has been out of action for some considerable time due to mechanical failure.

"This is the latest in a long line of technical issues and I understand the frustration of harbour users.

"It's vital that we find a long-term, sustainable solution."

Fellow ward councillor Gordon Cowie (Independent) hoped that the dredger's return to operations would be a sign of better things to come.

He added: "I am pleased to see the boat finally working again after a long tie up and here's hoping it's onward and upward now."

Another left frustrated by the ongoing situation with the Selkie is Councillor Marc Macrae (Fochabers-Lhanbryde, Conservative), who last year chaired a public meeting bringing together harbour users. He was joined by, among others, Moray MP Douglas Ross and the chair of the economic development committee Councillor Graham Leadbitter (Elgin South, SNP).

"Seeing the Selkie tied up in the harbour for the last quarter will have greatly frustrated many and indeed the vessel is never far from my mailbox," Councillor Macrae said.

“I, too, share these frustrations, including those of the users of our harbours across Moray, who rely on the dredging work to safely operate and navigate their vessels, big or small.

“I understand that the engine of the Liebherr excavator required replacing rather than simple repair which of course comes at a cost to the public purse. Whilst we must appreciate the vessel works in a salt water environment, it by no means the only such vessel which does so, indeed fishing vessels, coasters right up to the mighty super tankers my late father captained are exposed to such conditions and are operated accordingly.

"Anyone who watches the Discovery Channel will have same the same type excavator operating on dredgers in the Bering Sea in some of the most inhospitable working conditions that can be experienced anywhere in the world.

“People will look at what is basically a new vessel with low mileage on the clock and find it hard to the swallow the many issues which have beset the Selkie since its launch.

“The meeting I chaired in January 2020 heard from many dissatisfied harbour users and in the audience was Councillor Leadbitter who said himself he would take away the concerns raised.

“I have said in support of the vessel that we should maximise the use of this public asset to ensure that it is productive here in Moray and for customer use elsewhere and alongside colleagues I continue to work with officers to explore all avenues to see the MV Selkie succeed.”

According to the documents presented to councillors, when the Selkie returns to dredging operations the priority areas for dredging remain Burghead (sand bank approaching harbour entrance) and Buckie (entrance channel).

Other dredging requirements include: Findochty (dredging to run in conjunction with pontoon renewal works); Cullen (removal of sand from the beach side of the basin);Hopeman (continue to work on the mound of silt at the end of the pontoon system and another mound in the outer basin).

Sign up today and get 50% off a six-month subscription with promo code '50OFF'.